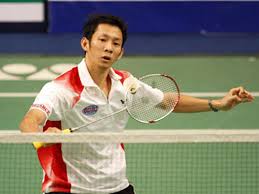 Vietnam’s top badminton player Nguyen Tien Minh lost 0-2 to Hans-Kristian Vittinghus of Denmark in the second round of the Japan Open on June 12, failing to progress further in the competition, as previously expected.

After his victory over Chinese competitor Wong Wing Ki on June 11, high hopes were pinned on him to defeat the world No.15 Hans-Kristian Vittinghus, who ranked five places below the Vietnamese player in the global ratings.

Vittinghus won two consecutive sets (21-12 and 21-11) after 32 minutes of competition, despite constant efforts by Tien Minh.

With the unsuccessful performance at the Japan Open, Minh is likely to be removed from the world’s top 10 players rated by the Badminton World Federation (BWF). Last year, Tien Minh reached the semi-final round of the tournament in Japan.

As planned, he will still compete at the Indonesia Super Series from June 17 to 22.