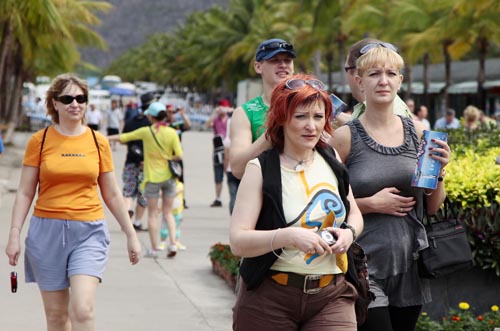 It might be too soon to say that Vietnam has become less attractive to international holidaymakers, but the decrease in tourism arrivals in the first two months of this year is worth worrying about.

The number of international tourists choosing to spend their holidays in Vietnam dropped 10.6 percent compared to the Jan-Feb period last year, according to the Vietnam National Administration of Tourism.

The old, undiversified tourism products, a polluted environment, and insufficient support information for tourists should be to blame, industry insiders argue.

Ngo Nguyen Thuy Oanh has nearly 20 years of experience in guiding tourists on river tours in the Mekong Delta province of Tien Giang, and she can clearly feel the gloomy cloud hanging over the tourism industry there.

“Japanese tourists are nowhere to be seen whereas Western visitors are even harder to find,” Oanh said as she accompanied a group of vacationers on a boat to Thoi Son Isle, a popular attraction in the southern province that is only 65km away from Ho Chi Minh City.

The boat departed from a small dock where other tour guides were seen occupying themselves with their smartphones while the attendants of a souvenir shop were leisurely fishing to kill time.

On board with Oanh on the 20-year-old boat, coded TG0058, were 11 tourists from the U.S., Australia, Switzerland, and Indonesia.

“At this time last year we were more than busy,” Oanh said while waiting for the holidaymakers to enjoy honey tea on the isle, a service she said has remained in the travel itinerary for nearly two decades.

“Then the tourists will taste some local fruits, listen to a couple of vong co [traditional southern music] pieces, and take a boat rowing tour, as it always is,” she said.

“What a poor set of tourism services we have,” she concluded.

But changing the services seems too difficult a job for the people behind them.

Thuy Linh and her husband have been running the honey tea shop on Thoi Son Isle for three years. There are four such destinations, where tourists can also tour the bee farms and buy souvenirs on the isle, all following the same business model.

“I only do what people do,” Linh said. “Making some changes? I’d love to, but I don’t know how to change [the service].”

Oanh said the situation would be much better if there were investors willing to pay for service upgrades.

“But investors are hesitant to open their pockets because it is not easy to recoup investment,” Nguyen Thanh Vu, the captain of the TG0058, explained as to why tourists still have to travel on a two-decade-old boat.

Carlo Campisrn, an Italian backpacker, and his girlfriend have spent four weeks traveling across Vietnam, but the two have little impression of the places they have visited, from Sapa, Hanoi and Ha Long Bay in the north, to Hue and Hoi An in the central region.

Vietnam has many attractions but their appeal is not strong enough for tourists to make a return trip, Campisrn said after touring the Saigon Central Post Office in Ho Chi Minh City.

The Italian did not conceal the fact that he has not thought of returning to Vietnam, as many of the country’s beautiful landscapes have been polluted.

Rubbish was floating on the UNESCO-recognized Ha Long Bay, and scattered around many streets in Hanoi, he elaborated.

Campisrn said he was also annoyed by street peddlers wherever he went, and using public transportation was a real challenge thanks to the lack of information for foreign travelers.

The chief executive of a Vietnamese international tour organizer said the country’s tourism products are “too outdated” compared with other Southeast Asian countries.

“Our Thai partners introduce at least five new tourism attractions on an annual basis, while the tour programs in Vietnam have been unchanged for years,” he said.

Pham Ha, founder and director of Hanoi-based Luxury Travel Co., pointed to poor marketing campaigns which have left few international tourists with knowledge of the attractions in Vietnam.

“We also pay little attention to alleviating pollution at the tourism spots,” he added.