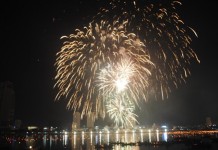 Over 2,000 fireworks will be launched from Nguyen Van Troi Bridge and districts of Ngu Hanh Son, Lien Chieu and Hoa Vang on the eve of the Lunar New Year.

Also, a performance in celebration of the lunar New Year will take place at night on Tran Hung Dao Street on the Han River bank, while the Han Bridge will swing its span from 11 to 12pm tonight.

The city will also host music and light performances on the Rong (Dragon) bridge at 9pm from February 7 to 10.

As usual, the bridge, constructed in the shape of a dragon, is designed to breathe fire and spray water from the dragon’s head on Saturday and Sunday nights, in combination with music and lights.

Additionally, a fireworks and art performance will take place at the ancient city of Hoi An’s An Hoi Sculpture Park on the Hoai River and Cham Island.

Also, local folk songs and dance performances will be staged at the Sculpture Park beginning at 8.30pm.

Further, bells, gongs and drums will be rung from pagodas and temples in the city at midnight to begin the Lunar New Year. — VNS