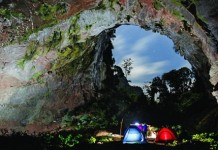 A man instrumental in putting Son Doong Cave, the world’s largest cave, and its neighbors on the world map is positive that caving tourism will become the ‘nucleus’ of Vietnam’s tourism sector, and that the area will also grow into a caving hub worldwide.

The high-profile Son Doong Cave and its neighbors are at the core of the UNESCO-recognized Phong Nha-Ke Bang National Park, located in the north-central province of Quang Binh.

Chau A, a native of Phong Nha Village nestled in the area, knows the area like the back of his hand, and noted that Vietnam has moved in tandem and been a driver of the world’s thriving cave-exploring trend in recent years.

Many countries have harnessed their cave-exploring potential or formulated plans to tap into their cavernous wonders.

Caving tours appeal to adventure seekers for all the mysteries and surprises they offer, Chau A added.

The expeditions help tourists feel at one with nature and offer them a first-hand taste of breathtaking grottos and forests which a lot of countries are gradually losing to economic boom. 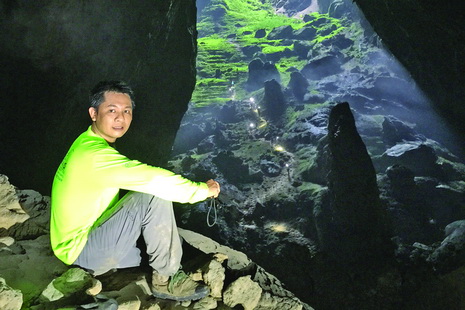 The ‘core’ of Vietnam’s tourism

French speleologists arrived in northern Vietnam approximately a century ago and discovered a number of grottos in Phong Nha and Hoa Binh Province.

However, the cave exploration quest did not come into spotlight until the 1990s, when a group of scientists from the British Cave Research Association (BCRA), led by Howard Limbert, conducted a survey on and took meticulous measurements of more than 500 cavernous wonders spanning several mountainous northern provinces, Chau A noted.

Still, pundits believed many other grottos remained ‘dormant,’ secluded in karst mountains along the Truong Son range, which runs from north to south as the ‘backbone of Vietnam.’

Vietnam deserves to be dubbed ‘a world of cavernous marvels,’ the travel firm director asserted.

The first opportunity to promote Son Doong Cave came in March 2011, when National Geographic Magazine astounded the world with its announcement that the Vietnamese cave is the world’s largest.

“Organizing excursions into Son Doong did not cross our minds then. We only offered brief tours to En and Tu Lan Caves at that time,” Chau A recalled.

En (Swallow) Cave is around two kilometers from Son Doong, while Tu Lan Cave System is located approximately 70 kilometers from the Phong Nha-Ke Bang National Park, according to Oxalis’ website.

“Such expeditions were quite a draw to foreign tourists, but it was far from being a smash which could catapult caving tourism to the new height it has reached now,” Chau A added.

In April 2013, the young man and Howard Limbert, who had led the BCRA surveys on Son Doong, filed an ambitious project to launch adventure tours into the cave and promote caving tourism to the world, while turning Quang Binh into a ‘cave kingdom’ on the world map.

Four months later, the provincial People’s Committee gave their nod to the duo’s project, and tasked Oxalis with organizing such tours on a pilot basis, Chau A further recalled. 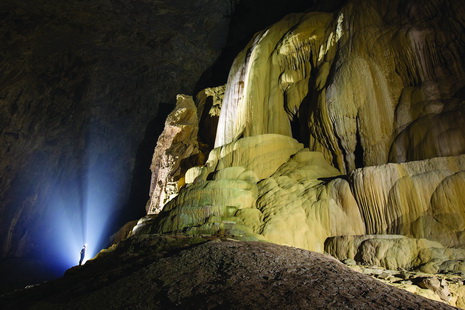 Members of the Oxalis Co. and British Cave Research Association are seen surveying inside a new cave. Photo: Ryan Deboodt

Huffington Post covered Son Doong and its tours in September that year.

The cave later made headlines in more than 50 famous media outlets, including national television channels from Japan, Germany, the U.S., England, Italy, and Spain.

Quang Binh Province also ranked 8th out of 52 destinations worldwide and was the top spot in Asia in a list issued by The New York Times in September 2014.

Son Doong Cave was the main reason behind Quang Binh’s addition to the list, according to the Vietnamese Ministry of Culture, Sports and Tourism.

In early 2015, in a lengthened bid to promote Son Doong, American photographer Deboodt returned to Vietnam on an invitation to shoot more of the resplendent wonder.

In May that year, the photographer introduced his stunning photo collection and drone video clip of Son Doong, which captured beams of sunlight dancing on a doline inside the cave.

The video clip enjoyed more than three million views within two weeks after being posted.

Deboodt’s collections, which highlight the pristine allure and resplendence of Son Doong, grabbed attention from the directorate of the American Broadcasting Company (ABC).

The company decided to produce and air live a program accentuating the astounding magnificence of Son Doong and En Caves, its much-loved show “Good Morning America,” in May 2015.

It was the first time that the ABC had reported live from inside the grottos, its crew members told Tuoi Tre newspaper reporters, who joined them while filming.

The ABC’s painstaking filming and live airing were a groundbreaking milestone for Vietnam’s caving tourism.

The show’s success has inspired local tour operators to introduce Son Doong to their clients, Chau A observed.

The Vietnam National Administration of Tourism has also selected Son Doong as the focal point in their international tourism promotion.

The cavernous marvel was depicted in a dizzying 360-degree photo essay published on May 21, 2015 on the website of National Geographic Magazine. 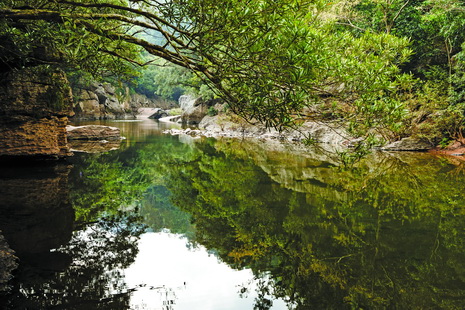 On the way to an unnamed grotto. Photo: Ryan Deboodt

Its magnetism lies in that trips into Son Doong are limited in numbers and only to visitors with deep pockets, enhancing thrill seekers’ craving for the adventures it offers.

Chau A added that the province has allowed his firm to launch more cave-exploring tours which are shorter, less physically challenging, more affordable and open to more tourists at one time.

Quang Binh Province, which boasts pristine forests, Southeast Asia’s largest karst mountain system, and hundreds of recently discovered grottos, is gradually turning itself into the hub of caving tourism in the region and the world, Chau A concluded.